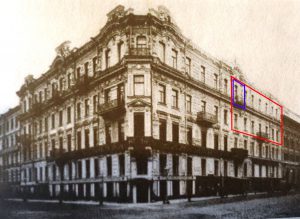 Tchaikovsky House is a modern mini-hotel run by an European team. It opened in 2016 and it sits in the beating heart of Saint Petersbourg, on the corner of Malaya Morskaya and Gorokhovaya. Nevsky Prospect, the Hermitage State Museum, St. Isaac Cathedral and Admiralteystvo are right on our doorstep. Moreover, the mini-hotel is opposite the metro station Admiraltiskaya. Our hotel is situated on two floors and it features 7 standard rooms, 7 superior rooms and 4 suites. Two rooms are equipped with a private balcony. Every room has an en-suite bathroom and classic style forniture, in line with the history of the building. Free Wi-Fi is available everywhere in the hotel. 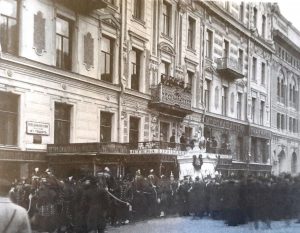 The building in which our mini-hotel is situated was erected in 1836. It is classified as Russian national monument because both the composer Tchaikovsky and the dancer Ulianova – one of the most important ballerinas from the Bolshoy Theatre in Moscow – lived there. In the upper-left picture the windows of the mini-hotel are highlighted in red, while the apartment where Tchaikosvky lived is highlighted in blue. Indeed, Tchaikovsky lived in one of the rooms of our hotel, called suite Tchaikovsky, which is now equipped with an original stove from that period. The picture on the right portrays the funeral of the composer at the exit of the building, where he spent his last days.